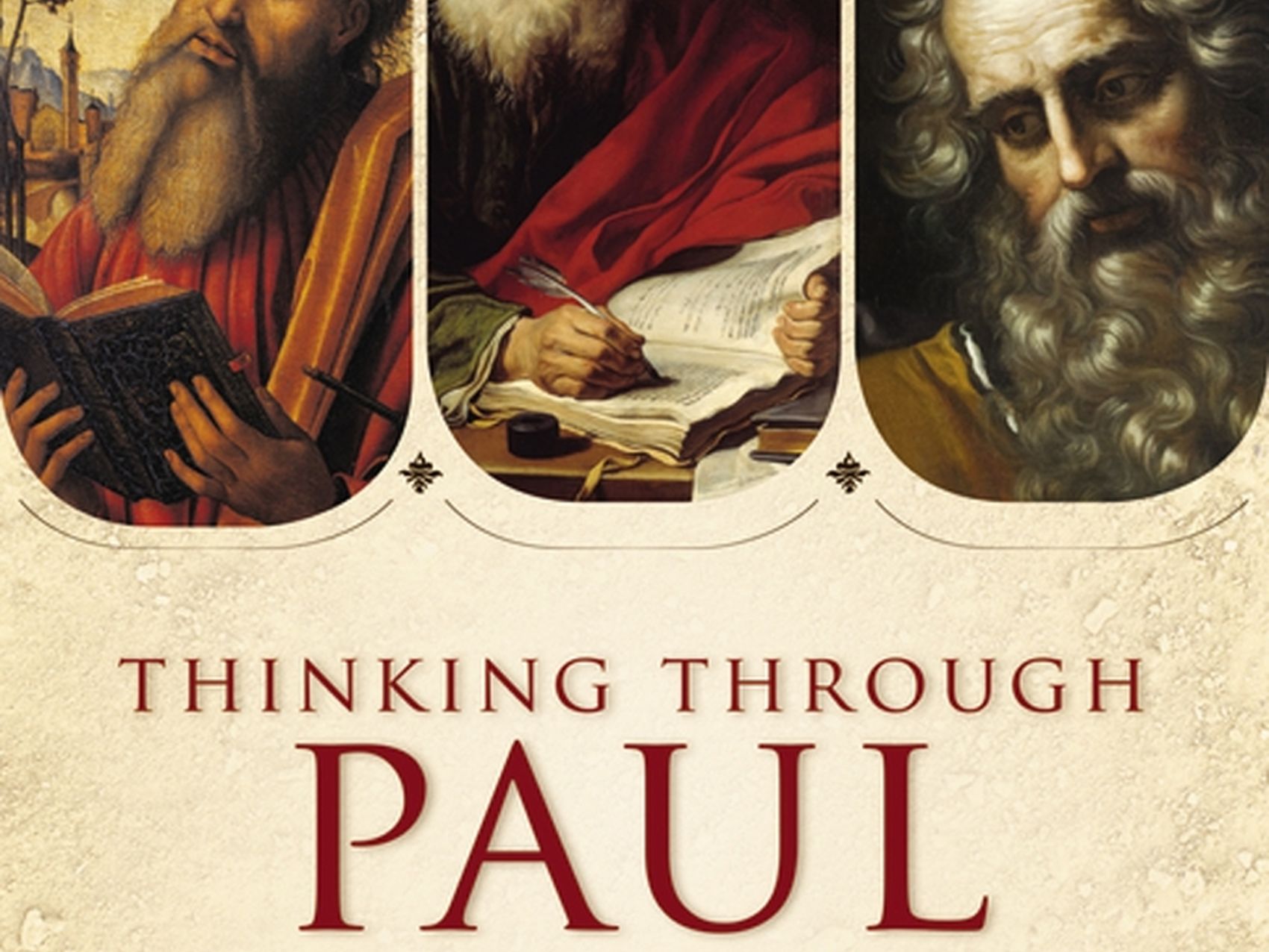 On Tuesday we examined the question, What kind of thinker was Paul? Today we extend that examination by exploring the end of Paul’s thinking. Because as Bruce Longenecker and Todd Still explain in their new book, Thinking Through Paul, that end isn’t thinking itself, but acting.

Paul’s theological discourse is intricately connected to his attempts to influence the character of Jesus groups and the Jesus-followers within those groups. For Paul, theologizing on the grand scale is never an end in itself, but it serves to inform the kind of people Christians should be and the kind of decisions that they should make in their individual and corporate lives. (pg. 350)

Paul’s theologizing was meant to inspire a moral ethos—an atmosphere which inspired the character of the church. The excerpt below explores three aspects of this “atmosphere”: Freedom, Responsibility, and Self-Giving.

Read it, share it, and then meditate on the self-giving freedom with have in Christ.

Paul’s theological discourse is intricately connected to his attempts to influence the character of Jesus groups and the Jesus-followers within those groups. For Paul, theologizing on the grand scale is never an end in itself, but it serves to inform the kind of people Christians should be and the kind of decisions that they should make in their individual and corporate lives.

Consequently, this chapter probes issues pertaining to the moral ethos that Paul’s theological discourse was meant to inspire within groups of Jesus-followers. The focus is less on “ethics” (prescriptions or stipulations about specific ethical topics) and more on “ethos.” Ethics and ethos overlap, of course, but they are also distinct at times. Ethics operates on the basis of stipulations about what should or should not be done in particular situations or with regard to a particular ethical issue. Ethos is more about the atmosphere that operates within a group, informing the character of its corporate life, from which ethical decisions are made. In a nutshell, the ethos of a community informs the ethical decision-making that goes on within that community and, consequently, shapes the actions of Christians who participate within that community…

Is it a good thing that Jesus- followers have “freedom” in Jesus Christ? And does the freedom of Jesus-followers have anything to do with the grand apocalyptic narrative that undergirds much of Paul’s theological discourse?

That Jesus- worshipers enjoy freedom is a theme that appears in several of Paul’s letters. In Rom 8:21 it seems almost an afterthought when Paul is speaking about creation being in bondage to decay and how it “will obtain the freedom of the glory of the children of God.” In 2 Cor 3:17 Paul asserts boldly that “where the Spirit of the Lord is, there is freedom.

But the notion of freedom comes into play especially in Galatians 5, after Paul’s depiction of slavery in earlier parts of the Galatian letter. In his allegory of Abraham’s offspring in Galatians 4, for instance, Paul compares Jesus- followers to offspring of the “free woman” (Sarah) instead of the “slave woman” (Hagar), concluding the allegory with the claim, “It is for freedom that Christ has set us free” (5:1). The sentence might look somewhat awkward, verging on redundancy. But Paul has constructed it in this way for a particular purpose, as will become evident from the following paragraphs.

For now, it is enough to note that Paul uses the notion of freedom as a kind of shorthand for the conviction that Gentile Jesus-followers need not “enslave” themselves to Torah observance. When Gentile Jesus-followers were told that they should be circumcised, Paul understood this to be a way of undermining “the freedom we have in Christ Jesus” and to be a way of “mak[ing] us slaves” (Gal 2:4). So too, Paul’s claim that “it is for freedom that Christ has set us free” is followed by the exhortation to “stand firm” against those who inspire Gentile Jesus-followers to be circumcised, lest the Galatians “be burdened . . . by a yoke of slavery” (5:1). For Paul, then, the “freedom” of Christians could be used as a shorthand slogan for “salvation has nothing to do with observing the rules of the Torah” — or with anything other than Jesus Christ, for that matter.

But Paul’s discourse of freedom was vulnerable to misinterpretation. This became all too clear to Paul himself when dealing with Christians in Corinth. If Jesus-followers are not required to observe the Torah, could it be that they really have no moral constraints on their behavior? Based on Paul’s gospel of “freedom,” some Corinthian Christians began to imagine that they had “the right to do anything” (1 Cor 6:12; 10:23). Paul had gained a reputation among some people for promoting a moral “libertinism,” in which one could live without any kind of moral restraint, and all to the glory of God (see, e.g., Rom 3:8; 6:1, 15). After all, if grace is freely given “apart from law” (Rom 3:21), perhaps those who have faith in Jesus can live in any way they want, without worrying about being condemned as sinners. This might even be thought to enhance God’s reputation as a gracious God, who does not hold sin against those who have put their faith in Jesus.

Paul cannot countenance such thinking (cf. his harsh words in Rom 3:8). Instead, he makes it clear that freedom among Christians requires careful handling, lest it become a means for their own moral servitude.

This is evident in Gal 5:13 (which will serve as a key verse at two further points further down in this discussion). Whereas the first sentence of Gal 5:13 calls Christians “to be free,” in the second sentence Paul gives this critical stipulation: “But do not use your freedom to indulge the flesh.” Paul often uses the word “flesh” to refer to something like “the reinforced proclivity towards sinful living” rather than “the sinful nature,” as it is sometimes mistranslated). Here Paul warns against the misuse of the freedom that Jesus- followers enjoy in Jesus Christ.

Paul’s discourse of “freedom from” cannot be fully accounted for without immersing it in the soil of the apocalyptic narrative highlighted in chapter 11 above. In particular, we do well to remind ourselves of the theological contours of Paul’s discourse in Romans 5 through 8. There, Paul depicts the cosmos as being held in the grip of suprahuman powers, with human sinfulness and death resulting as a consequence. Paul imagines the cosmos and everything within it suffering from the same fundamental problem — the forces of chaos seem to reign supreme, that is, the powers of Sin and Death. For Paul, what God has done in the death and resurrection of Jesus introduces a new situation, one that guarantees freedom from those forces of chaos.

In his discourse on baptism in Romans, Paul makes the point forcefully. Followers of Jesus have been baptized into Christ Jesus and have been united with him in death. As a consequence, the power of Sin is prevented from getting a foothold in their lives. Moreover, although the forces of chaos can get no traction in the lives of those who are already dead, God can reach into places where there is nothing and bring life out of them. He did precisely this in the moment of creation, and he did the same when he raised Jesus from the dead. So too those who have “died with Christ” cannot be used as instruments of the powers of chaos, but come alive as instruments of God’s grace and righteousness... Thinking Through Paul: A Survey of His Life, Letters, & Theology