Thousands of years later, people are still fascinated and intrigued by the Bible.

And skeptical. The recent Newsweek Christmas cover story bears witness to this.

Mostly people just don’t know what to make of the Bible. They wonder, “How does this book know that about me? How does it know that about our world—especially when it was written so long ago?”

John Dickson hopes to guide the fascinated and intrigued, skeptical and curious alike with his new book A Doubter’s Guide to the Bible.

It’s an ambitious project, to be sure, because what he offers is “a snapshot of the worldview and lifestyle the Bible inspires;” it’s a “‘biblical primer’ for those who aren’t sure what to make of the Bible.” (11)

If you know people who are skeptical of history’s most popular book, it will help them discover “what it means for life if the Bible happened to be true.” (12)

The Bible is history’s number one bestseller by a factor of about ten. Six billion copies have been sold. Admittedly, it had a head start on other books; it was the first item off the modern printing press. But it has been Number One every year since records have been kept — except for 2007, when Harry Potter and the Deathly Hallows topped the list, with forty-four million sales. Unlike most bestsellers, however, the Bible actually increases sales each year. Harry Potter’s forty-four million in a year is spectacular, but no doubt it dropped to about ten million the following year, one million the next, and now Deathly Hallows probably sells in the mere hundreds of thousands.

The latest figures for the Bible are hard to fathom. It sold thirty million copies in 2009 alone. That is 82,000 copies a day, 3,400 copies an hour. That means someone gets a Bible every second — perhaps sixty copies have changed hands since you started reading this page. If we were to include the sales of individual portions of the Bible, such as books containing just the Gospels (the four biographies of Jesus), you have to multiply these numbers by a factor of twelve. The Bible is available in 2,500 languages, Harry Potter in just fifty-five.

Why Is the Bible So Popular?

One answer to this question about the Bible’s popularity is linked to the church’s power. Some people think of a domineering Vatican or some dark right-wing lobby imposing the Bible wherever it goes. I think that gets things the wrong way around. The church does not create the Bible; the Bible creates the church. Proof of this in the modern world is the situation in China. No one argues the Bible is being imposed on the Chinese, who have been under atheistic communist rule for decades. However, just recently, Amity Press in Nanjing had a public celebration for the 100 millionth Bible published in China. Today this monumental printing company, which I recently had the pleasure of visiting, produces twelve million Bibles a year, making up one third of all Bibles published in the world. Such figures make it difficult to sustain the argument that the church is imposing its holy book. The Bible has its own life, its own uncanny attraction.

I believe the Bible is so popular and influential because it tells a story we recognize as true. I don’t just mean it tells an accurate story — though it is telling that the Bible stands tall even after more than two hundred years of secular criticism. What I mean is that its account of humanity and the world we live in rings true. Reading the Bible can be like meeting someone you don’t know who, oddly, somehow seems to know you deeply. It is uncanny. Sometimes when

you read the Bible, you find yourself asking, “How does this book know that about me? How does it know that about our world — especially when it was written so long ago?”

When you read the Bible, it is as though it reads you. And it is my hope that as you dip your toe into the Bible’s story and viewpoint, you will find yourself feeling that the Good Book knows more about the world — and about you — than any normal book does.

This little book is an ambitious attempt to unpack the whole Bible or, perhaps more accurately, to give a sense of the whole biblical narrative and of the “theology” that emerges from it. More than that, I want to offer a snapshot of the worldview and lifestyle the Bible inspires.

This is probably more than anyone should attempt in so slim a book. The Bible itself, in most editions, runs to about a thousand pages. The walls of my office are lined with hundreds of commentaries on the biblical texts, literally hundreds of thousands of pages devoted to exploring

the history and meaning of the Scriptures. As for giving insight into what it means to live in the light of the Bible, greater minds and better human beings than I have written about authentic Christian living.

If I can assume these confessions haven’t put you off, the value of this book is that it offers something of a “biblical primer” for those who aren’t sure what to make of the Bible. Whatever our beliefs, there is still enormous value in getting our heads around why this book, like no other, has shaped the lives of millions of people for thousands of years (with no sign of letting up). This is not really an exercise in “apologetics” — the art of trying to prove the truth of the Bible — but a simple outline for curious doubters of what it might mean for life if the Bible happened to be true. (9-12)

A Doubter's Guide to the Bible

Jeremy Bouma
Jeremy Bouma (Th.M.) has pastored on Capitol Hill and with the Evangelical Covenant Church in Michigan. He founded THEOKLESIA, which connects the 21st century Church to the vintage Christian faith; holds a Master of Theology in historical theology; and makes the vintage faith relevant at jeremybouma.com.
Next Post
eBook Sale: Change Your Mind and Your Life (Ends 1.25.15) 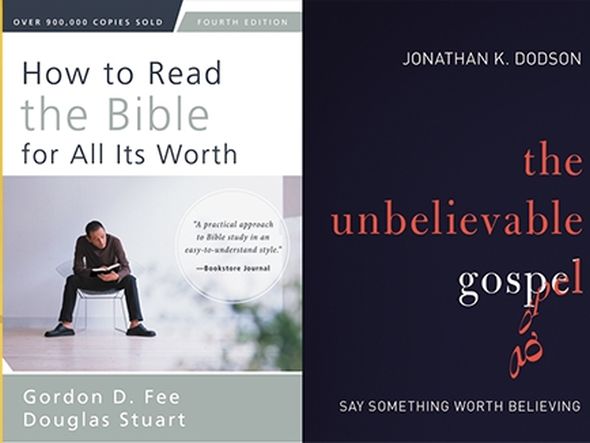 eBook Sale: Change Your Mind and Your Life (Ends 1.25.15) "All other things being equal, your ability to help people will be directly related to how much you read." One of my fav...
Your form could not be submitted. Please check errors and resubmit.