[Common Places] The Promise and Prospects of Retrieval: Recent Developments in Analytic Theology

The literature in philosophical theology gradually became more theologically informed, more sophisticated, and diversified to include a range of theological topics including central matters like the Trinity, Incarnation, Atonement, sin, eschatology, the nature of faith, and the like. It developed largely independently of contemporary systematic theology, however, a matter that has been noted and lamented by people like R. R. Reno, who has written of the “blindness” of modern theology to the analytic literature and of “theology’s continental captivity” referring to the way in which theologians happily engage major continental philosophers as dialogue partners while ignoring analytics.

However, as this philosophical-theological literature matured into the 1990s, it became increasingly difficult for those outside the conversation to ignore. To all intents and purposes this was theology being done by Christian philosophers independent of the theological schools and seminaries. By the early 2000s some rapprochement between the two sides was beginning to happen. Analytic theology was, as William Abraham has put it in conversation, “an accident waiting to happen.” But what was new about it? In one respect, not very much. According to some pundits it was merely philosophical theology rebranded. Yet there were some important differences: theologians as well as philosophers were now working on theological topics using the sensibilities and literature of analytic philosophy to ask dogmatic questions. Inevitably, this led to systematic theology done in the mode of analytic theology, as other theologians worked in the mode of Postliberalism, or Radical Orthodoxy. Once there were practicing theologians on board it became difficult to marginalize the movement within the study of religion as the preserve of a few Christian philosophical trespassers.

As the work of analytic theology has flourished since 2009, more collaboration has brought significant steps forward. In addition to a new journal, a book series, an annual conference at Notre Dame, and initiatives in Europe and elsewhere, there is a literature that really engages with the theological tradition, with ancient and modern theologians, and with questions of theological method as well as constructive theology. Examples include Tom McCall’s work on the Trinity, Marc Cortez’s work on theological anthropology, Kevin Hector and William Abraham who have both written on theological method, Marilyn Adams’ work on medieval Christology, Mike Rea and Hud Hudson who have worked on original sin, and so on. The fact that analytic theology can now be found represented at the annual Evangelical Theological Society conferences, at the American Academy of Religion annual meetings, at major regional theology conferences such as those at Wheaton and in Los Angeles, and in top-tier peer-reviewed theological organs as well as philosophical ones, is evidence of the “normalization” of analytic theology in the wider guild.

In many ways, analytic theology is a return to more classical analytical sensibilities that have governed Christian theology for much of its history in scholasticism, as well as the work of key thinkers from St. Augustine and St. Anselm of Canterbury to Jonathan Edwards. Yet it is not just this; there is a real concern to engage in wider theological and religious discussion, and to foster dialogue between the Abrahamic faiths, as can be seen in the recent symposium on Yoram Hazony’s work in the Journal of Analytic Theology.

There is also the beginnings of an awareness of the limits of analytic theology, and of worries it must take more seriously if it is to continue to flourish. These include concerns about ontotheology (roughly, the notion that the god of analytic theology is an idol), criticisms from feminist theology, the place of metaphor and tropes in religious language, and the relationship to other theological methodologies as well as allied disciplines such as biblical studies. There is much work to be done. But the fact that analytic theology has already made such headway indicates that it is meeting a theological need, and making a significant constructive contribution to twenty-first-century Christian theology.

Oliver Crisp (PhD, King’s College, London) is professor of Systematic Theology at Fuller Theological Seminary in Pasadena, California. He is author of numerous books in philosophical and systematic theology, including Divinity and Humanity: The Incarnation Reconsidered; Jonathan Edwards on God and Creation; and Deviant Calvinism: Broadening Reformed Theology.

(Image: The Creation of Adam, By Michelangelo Buonarroti [Public domain], via Wikimedia Commons)

Oliver Crisp
Oliver Crisp is professor of systematic theology at Fuller Theological Seminary. He has an MTh from University of Aberdeen and PhD from King’s College, University of London. He is the co-editor of Christology, Ancient and Modern and Advancing Trinitarian Theology.
Next Post
5 Ways the Doctrine of the Trinity Keeps Theology Healthy & Balanced 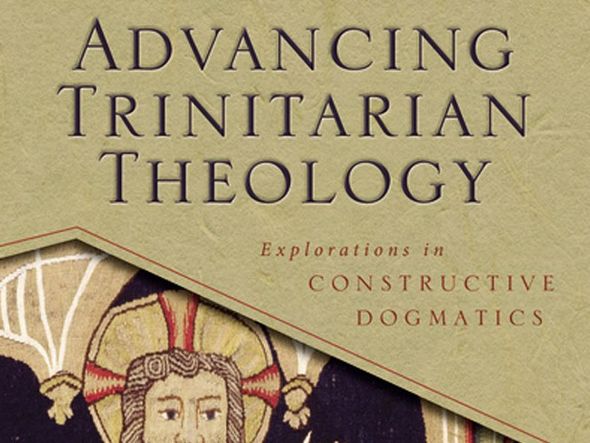 5 Ways the Doctrine of the Trinity Keeps Theology Healthy & Balanced Oliver Crisp and Fred Sanders believe the time is ripe for both theological retrieval and construction, exposition and r...
Your form could not be submitted. Please check errors and resubmit.