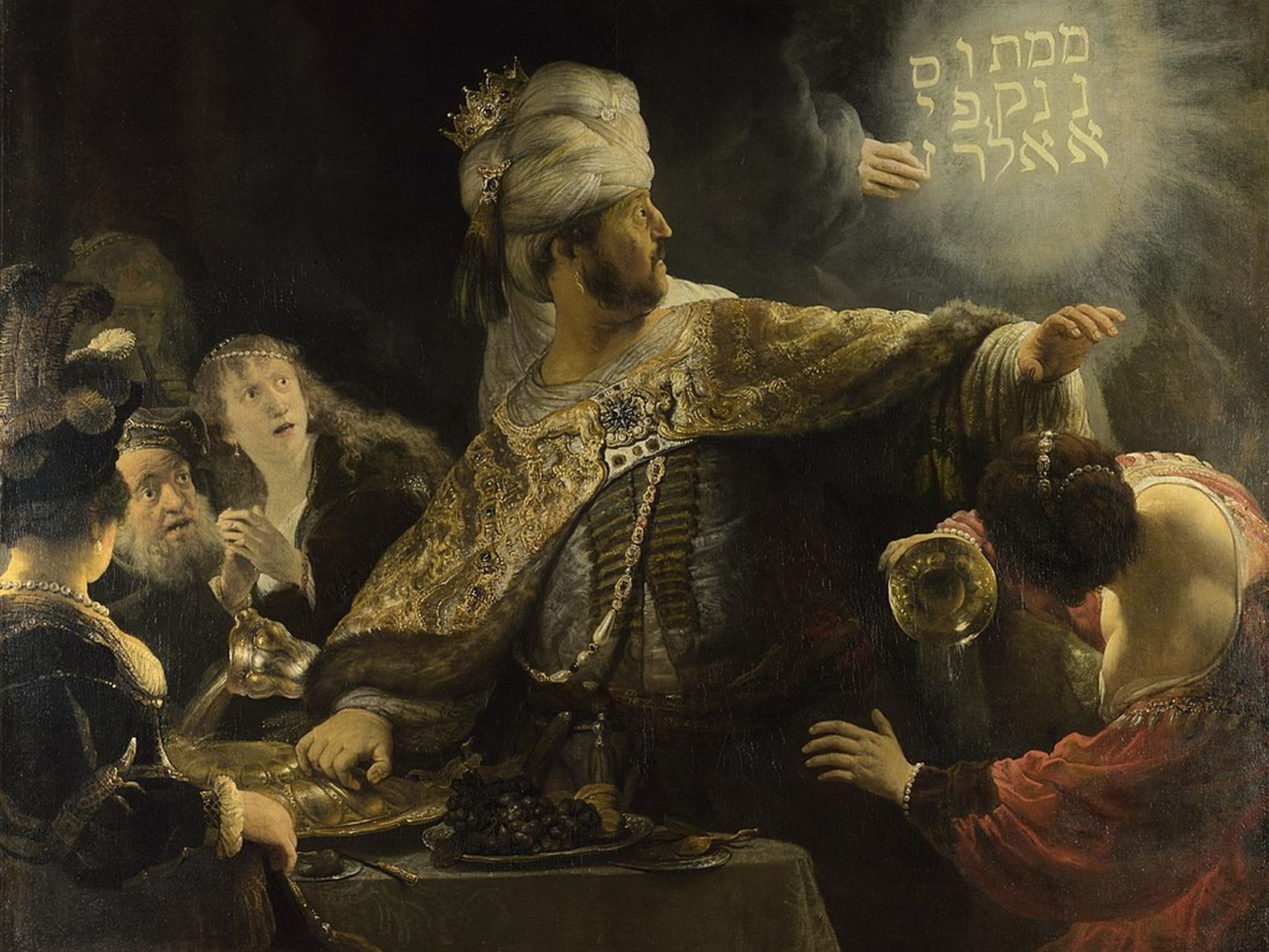 Mene, mene, tekel, parsin, is an Aramaic phrase found in chapter five of the Book of Daniel, the story of Belshazzar and the handwriting on the wall. (This is where we get the colloquial phrase “writing on the wall”.)

Daniel 5: The writing on the wall

Here’s the passage where we encounter this peculiar phrase:

This is the inscription that was written:

“Here is what these words mean:

Mene: God has numbered the days of your reign and brought it to an end.

Tekel: You have been weighed on the scales and found wanting.

Peres: Your kingdom is divided and given to the Medes and Persians.

Belshazzar was Nebuchadnezzar’s successor. He threw a great banquet for his noblemen, and at that banquet, he called for the holy vessels from the temple in Jerusalem (which were currently residing in the temple of his Babylon gods) so that he and his guests could drink from them.

Belshazzar’s use of the Israelites’ holy vessels was a great sacrilege, and when it happened, a disembodied hand appeared in front of the king and wrote something on the wall that he couldn’t read. This terrified him..

He called for his experts and promised power and riches to anyone who could read and interpret the writing. None of his wise men could explain it. But the Queen remembered the great interpreter, Daniel, who had served Belshazzar’s father, Nebuchadnezzar (Daniel 5:7–12).

So Belshazzar summoned Daniel, who was able to tell him what it meant.

Why couldn’t anyone read the writing?

There are several possible reasons why the writing was such a puzzle, and why no one knew what it meant.

The hand wrote in Aramaic. While that was the language of the day, Aramaic is a consonantal text, so there probably were not any vowels present. Reading a series of consonants can be difficult and creates room for different interpretations.

There may also not have been spaces between all the letters and words, so trying to sort out where the word divisions would have been could have been a challenge. Rembrandt actually has a famous painting called “Belshazzar's Feast” in which he depicts the letters written on top and bottom of each other, which would add another layer of complexity to the text.

How does Daniel interpret it?

When Daniel comes into the story, he reads the writing: Mene, Mene, Tekel, and Parsin (Daniel 5:25). There’s some variation depending on the translation, but he reads three nouns. Mene or mina, tekel or shekel, and parsin or upharsin, which is the plural of peres. So those are three nouns, and they are probably weights and measures that he's describing—but that doesn't mean anything.

It'd be kind of like saying penny, nickel, dime. What does that mean?

In his interpretation of what it meant, Daniel actually interprets three words that use the same consonants but can be translated as verbs.

He told the king that the writing meant:

Belshazzar rewarded Daniel for interpreting the writing on the wall. Then that very night, Belshazzar was murdered, and his kingdom was divided.