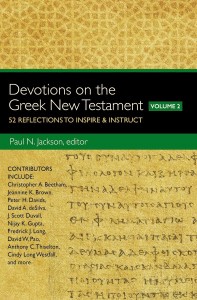 There is no shortage of inspiration for making 2018 your best year yet. May I suggest another, if not unusual source for inspiration?

Not the Greek scriptures, per se, but the Greek language. A brilliant new devotional book offers inspiration for practical living using insights from biblical Greek. It’s called Devotions on the Greek New Testament, the second such volume edited by Paul Jackson as a follow-up to the first.

The main point of each of the 52 devotions comes from a careful reading of the passage in the Greek New Testament, not from an English translation, using a variety of exegetical approaches, including: grammatical, lexical, rhetorical, sociohistorical, and linguistic. Each devotion closes with a practical application or spiritual reflection.

We’ve highlighted two of them below, offering practical inspiration from Philippians for believer-love and other-regard.

It’s not every day you’re invited to ponder the meaning of a collocation signifying clause. Yet Jeannine Brown invites us to do just that with διὰ τὸ ἔχειν in Philippians 1:7.

Translated “because [someone] has,” Brown explains: “Since infinitives have their subject as well as any direct object in the accusative case, the two accusatives με [‘me’] and ὑμᾶς [‘you’] are both potential candidates for a subject, with the other acting as the object of the infinitive” (94).

Rendering the clause either “I have you” or “you have me,” there are two possible translations:

Brown believes the word order favors the first rendering, yet it isn’t definitive given the flexibility in Greek. Which brings up two interesting points regarding the ambiguity—and what difference it makes to us.

First, clearly Paul and the Philippian believers love each other dearly. "So either reading would fit Paul’s expression of this warm, reciprocal relationship” (94). Second, Brown wonders whether Paul himself had recognized the ambiguity “and, rather than somehow ‘fixing’ it, decided that it was the perfect expression of their relationship so valued by both sides” (94).

Here’s the practical implication this year: Brown explains this one clause invites us to consider our relationships between others inside the church, ensuring they are as “warmhearted and empathetic” as Paul’s and the Philippian believers.

“With God’s power (2:12–13), may we, the church, seek out this same kind of joyous responsiveness to one another because we have each other in our hearts” (95).

Nijay Gupta: Christian Regard for the Other

Nijay Gupta offers us an apt comparison between our twenty-first-century quest for digital “status markers” (i.e. Facebook and Twitter followers) to those of first-century Romans—which Paul addresses in Philippians.

Roman society was agonistic, establishing a culture where one would do virtually anything to climb the ladder of success and receive widespread recognition. Rivalry, mockery, and mudslinging were commonplace in any sort of competitive context. That is what makes Paul’s counsel to the Philippians all the more remarkable (96).

Given this sociohistorical and lexical background, “What would it mean for us to be visible, present, and attentive to the ‘nobodies’ and conversely invisible and absent to those who could enhance our image and reputation?” (98).

"It is amazing to see," writes Jackson, "how many times an English translation simply obscures or misses what lies hidden in plain sight in the Greek text" (12).

Jeremy Bouma
Jeremy Bouma (Th.M.) has pastored on Capitol Hill and with the Evangelical Covenant Church in Michigan. He founded THEOKLESIA, which connects the 21st century Church to the vintage Christian faith; holds a Master of Theology in historical theology; and makes the vintage faith relevant at jeremybouma.com.
Next Post
Bestselling eBook Sale 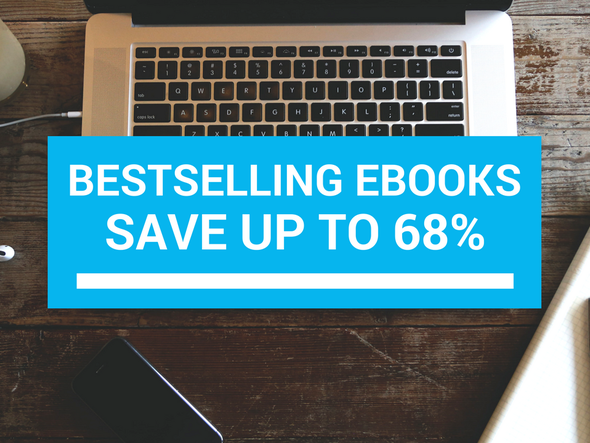 Bestselling eBook Sale Right now, 11 of our bestselling eBooks are on sale. (Deals end December 10, 2017). This includes deals from: Greg Kouk...
Your form could not be submitted. Please check errors and resubmit.