The Perfect Illustration for God's Outrageous Grace — An Excerpt from “PROOF”

Sometimes it’s hard being a teacher, particularly when you’re looking for that one story to illustrate your main idea.

That’s why we’ve gifted you your next illustration!

The next time you’re teaching on grace, here’s the perfect object lesson. It’s an excerpt from PROOF, a paradigm-shifting book on God’s outrageous, irresistible grace.

Below co-author Timothy Paul Jones tells the story of taking his adopted daughter to Disney World. I won’t ruin it for you, but for years she was denied going by her original adoptive parents. When she finally experienced the Magic Kingdom, here was her response:

Read the rest of the story to fully grasp this poignant response, and why it’s the prefect illustration for your next teaching on grace.

I never dreamed that taking a child to Disney World could be so difficult — or that such a trip could teach me so much about God’s outrageous grace.

Our middle daughter had been previously adopted by another family. I [Timothy] am sure this couple had the best of intentions, but they never quite integrated the adopted child into their family of biological children. After a couple of rough years, they dissolved the adoption, and we ended up welcoming an eight-year-old girl into our home.

For one reason or another, whenever our daughter’s previous family vacationed at Disney World, they took their biological children with them, but they left their adopted daughter with a family friend. Usually — at least in the child’s mind — this happened because she did something wrong that precluded her presence on the trip.

And so, by the time we adopted our daughter, she had seen many pictures of Disney World and she had heard about the rides and the characters and the parades. But when it came to passing through the gates of the Magic Kingdom, she had always been the one left on the outside. Once I found out about this history, I made plans to take her to Disney World the next time a speaking engagement took our family to the southeastern United States.

I thought I had mastered the Disney World drill. I knew from previous experiences that the prospect of seeing cast members in freakishly oversized mouse and duck costumes somehow turns children into squirming bundles of emotional instability. What I didn’t expect was that the prospect of visiting this dreamworld would produce a stream of downright devilish behavior in our newest daughter. In the month leading up to our trip to the Magic Kingdom, she stole food when a simple request would have gained her a snack. She lied when it would have been easier to tell the truth. She whispered insults that were carefully crafted to hurt her older sister as deeply as possible — and, as the days on the calendar moved closer to the trip, her mutinies multiplied.

A couple of days before our family headed to Florida, I pulled our daughter into my lap to talk through her latest escapade. “I know what you’re going to do,” she stated flatly. “You’re not going to take me to Disney World, are you?” The thought hadn’t actually crossed my mind, but her downward spiral suddenly started to make some sense. She knew she couldn’t earn her way into the Magic Kingdom — she had tried and failed that test several times before — so she was living in a way that placed her as far as possible from the most magical place on earth.

In retrospect, I’m embarrassed to admit that, in that moment, I was tempted to turn her fear to my own advantage. The easiest response would have been, “If you don’t start behaving better, you’re right, we won’t take you” — but, by God’s grace, I didn’t. Instead, I asked her, “Is this trip something we’re doing as a family?”

“Are you part of this family?”

“Then you’re going with us. Sure, there may be some consequences to help you remember what’s right and what’s wrong — but you’re part of our family, and we’re not leaving you behind.”

I’d like to say that her behaviors grew better after that moment. They didn’t. Her choices pretty much spiraled out of control at every hotel and rest stop all the way to Lake Buena Vista. Still, we headed to Disney World on the day we had promised, and it was a typical Disney day. Overpriced tickets, overpriced meals, and lots of lines, mingled with just enough manufactured magic to consider maybe going again someday.

In our hotel room that evening, a very different child emerged. She was exhausted, pensive, and a little weepy at times, but her month-long facade of rebellion had faded. When bedtime rolled around, I prayed with her, held her, and asked, “So how was your first day at Disney World?”

She closed her eyes and snuggled down into her stuffed unicorn. After a few moments, she opened her eyes ever so slightly. “Daddy,” she said, “I finally got to go to Disney World. But it wasn’t because I was good; it’s because I’m yours.”

It wasn’t because I was good; it’s because I’m yours.

That’s the message of outrageous grace.

Outrageous grace isn’t a favor you can achieve by being good; it’s the gift you receive by being God’s. Outrageous grace is God’s goodness that comes looking for you when you have nothing but a middle finger flipped in the face of God to offer in return. It’s a farmer paying a full day’s wages to a crew of deadbeat day laborers with only a single hour punched on their time cards (Matthew 20:1 – 16). It’s a man marrying an abandoned woman and then refusing to forsake his covenant with her when she turns out to be a whore (Ezekiel 16:8 – 63; Hosea 1:1 — 3:5). It’s the insanity of a shepherd who puts ninety-nine sheep at risk to rescue the single lamb that’s too stupid to stay with the flock (Luke 15:1 – 7). It’s the love of a father who hands over his finest rings and robes to a young man who has squandered his inheritance on drunken binges with his fair-weather friends (Luke 15:11 – 32)…It’s one-way love that calls you into the kingdom not because you’ve been good but because God has chosen you and made you his own. And now he is chasing you to the ends of the earth to keep you as his child, and nothing in heaven or hell can ever stop him…

But here’s what’s amazing about God’s outrageous grace: This isn’t merely what God the Father would do; it’s what he did do. God could have chosen to save anyone, everyone, or no one from Adam’s fallen race. But what God did was to choose a multi-hued multitude of “someones,” and — if you are a believer in Jesus Christ — one of those “someones” was you. God in Christ has declared over you, “I could have chosen anyone in the whole world as my child, and I chose you. No matter what you say or do, neither my love nor my choice will ever change.” That’s grace that’s truly amazing. (Pgs. 81-84)

PROOF: Finding Freedom through the Intoxicating Joy of Irresistible Grace 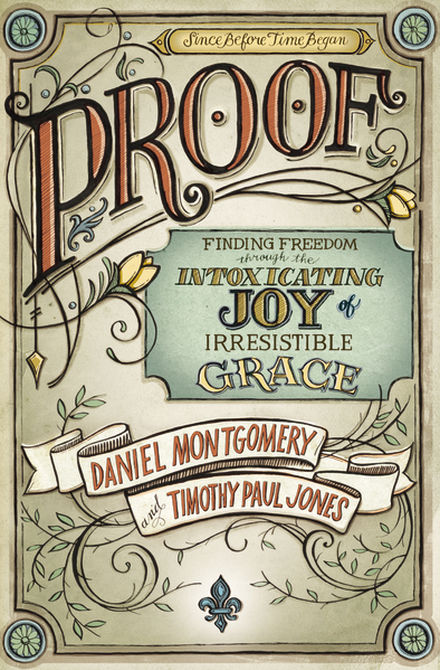 PROOF Daniel Montgomery
Don’t let the title PROOF fool you; this is not a traditional book about apologetics. It is a book that works out how Christians themselves are the “proof” of G...
Softcover
Not Available Request an Exam Copy
Next Post
The God We Don't Understand: An Idea for a Small Group Study
The God We Don't Understand: An Idea for a Small Group Study It's no secret that people struggle to understand God. Some are confounded by the problem of evil, wondering if God is s...
Related Posts
What Would Martin Luther Have Thought about PROOF? That&#39;s the question Timothy Paul Jones asks of his new book whom he co-authored with&#0160;Daniel Montgomery, called&#0160;PROOF.&#0160;Some are calling it a powerful new paradigm for ex...
Jeremy Bouma August 8, 2014
TULIP Is So 20th Century: PROOF Is New Framework for Canons of Dort There has been a resurgence of Calvinism of late. So much so that Time magazine declared “New Calvinism” among the top ten ideas changing the world in 2009. The TULIP has never been more po...
Jeremy Bouma May 27, 2014
Two Calvinists Discuss the Trouble with Calvinists — Excerpt from PROOF Recently Calvinists seem to have garnered something of an image problem. Googling &quot;Why are Calvinists...&quot; autofills several interesting descriptors. What&#39;s more, Calvinism has ...
Jeremy Bouma May 29, 2014
Your form could not be submitted. Please check errors and resubmit.