Translating the Name of the Lord (Hebrew and You with Lee M. Fields)

One of the many benefits of knowing a little Hebrew (and Greek!) is that it can help readers understand their English Bibles better. Understanding the name of the Lord is a good example.

There are many expressions used to refer to the God of Israel, but the one that may confuse English-only readers is the name of the Lord. There are several terms related to this. First we will look at pronunciation. Then we will explain Hebrew terms and translations.

The name of the Lord in Hebrew is יהוה, YHWH, known as the tetragrammaton (a Greek term meaning the “four-letter word”). The Jews often substitute the expression “the Name” for the actual name of the Lord, so that they do not even accidentally give offense to the Lord. It is a useful shorthand that we will use here. Many Jews today, even secular ones, will not utter or even write the Name. However, the topic of this discussion basically requires use of the Name in English. To any readers who are uncomfortable with the use of these terms, I apologize in advance and ask for your indulgence.

The common rendering of the Name as Jehovah is most likely not correct. Remember that at the time the texts were being composed, there was no system of writing vowels, except for the occasional use vowel-letters (please see Hebrew for the Rest of Us, 19-20). The system most commonly used was developed by the Masoretes (AD 500–1000). By at least after the Jews’ return from Babylonian exile, the Jews did not utter the Name. When the Masoretes added vowel points to the Name, most of the time they put in the vowels for a substitute term, Adonai. So, Adonai in Hebrew is אֲדֹנָי, ʾăḏōnāy, and removing the consonants leaves the vowels.**

**Removing the consonants leaves these vowels.[/caption]

The only complicating factor is the use of the Name or parts thereof in theophoric names. For example, Jehoahaz has the prefix Jeho- which is the first three letters of the Name. Do these suggest an original pronunciation like Jehovah? Probably not.

The Name and Combinations in the Hebrew Bible

The chart below lists terms for the Name. In addition to the Hebrew, it includes various English renderings in the OT and the LXX (Septuagint, the Greek translation[s] of the Hebrew Bible). The last column shows how the English NT renders the expressions.

Translating the Name of God 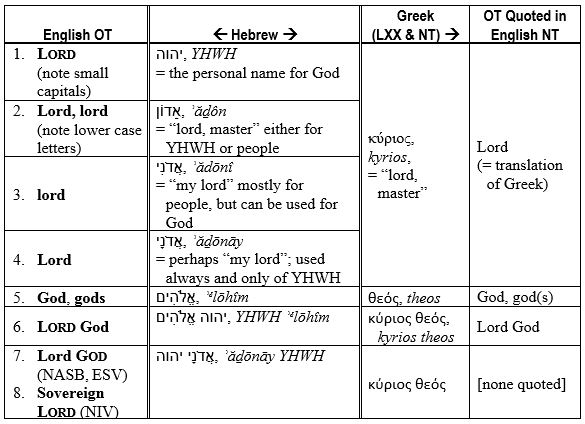 There are some difficult passages containing the Name. One such passage is Gen 18:3 in the theophany to Abraham (Gen 18:1 reads that יהוה, YHWH, appeared to Abraham and then proceeds with the story of the three men/angels). The MT reads that Abraham addressed his audience as אֲדֹנָי (with the qamets under the nun). This is the term usually reserved for YHWH. The LXX renders κύριε as a singular, but the identity is ambiguous. Jewish English translations differ. The Tanakh (1917) renders “My lord,” as though אדני is אֲדֹנִי, “my lord, sir,” addressing only one of the three. The Tanakh (1985) renders as though אדני is אֲדֹנַי (with the patach under the nun), “my lords,” addressing all three. In Gen 18:13, one of the three visitors is identified as יהוה, YHWH.

May we all reverence the Name.

Check out Devotions on the Hebrew Bible, co-edited by Lee M. Fields.

Lee Fields
Lee M. Fields writes about the biblical Hebrew language, exegesis, Hebrew translation, and related topics. He is a trained Hebrew scholar with a PhD from Hebrew Union College and is Professor of Bible and Theology at Mid-Atlantic Christian University. He is author of Hebrew for the Rest of Us and co-editor of Devotions on the Hebrew Bible.
Next Post
What is a leap of faith?

What is a leap of faith? We hear the phrase “leap of faith” all the time. It refers to a momentous decision we must make that lies outside reason...
Your form could not be submitted. Please check errors and resubmit.