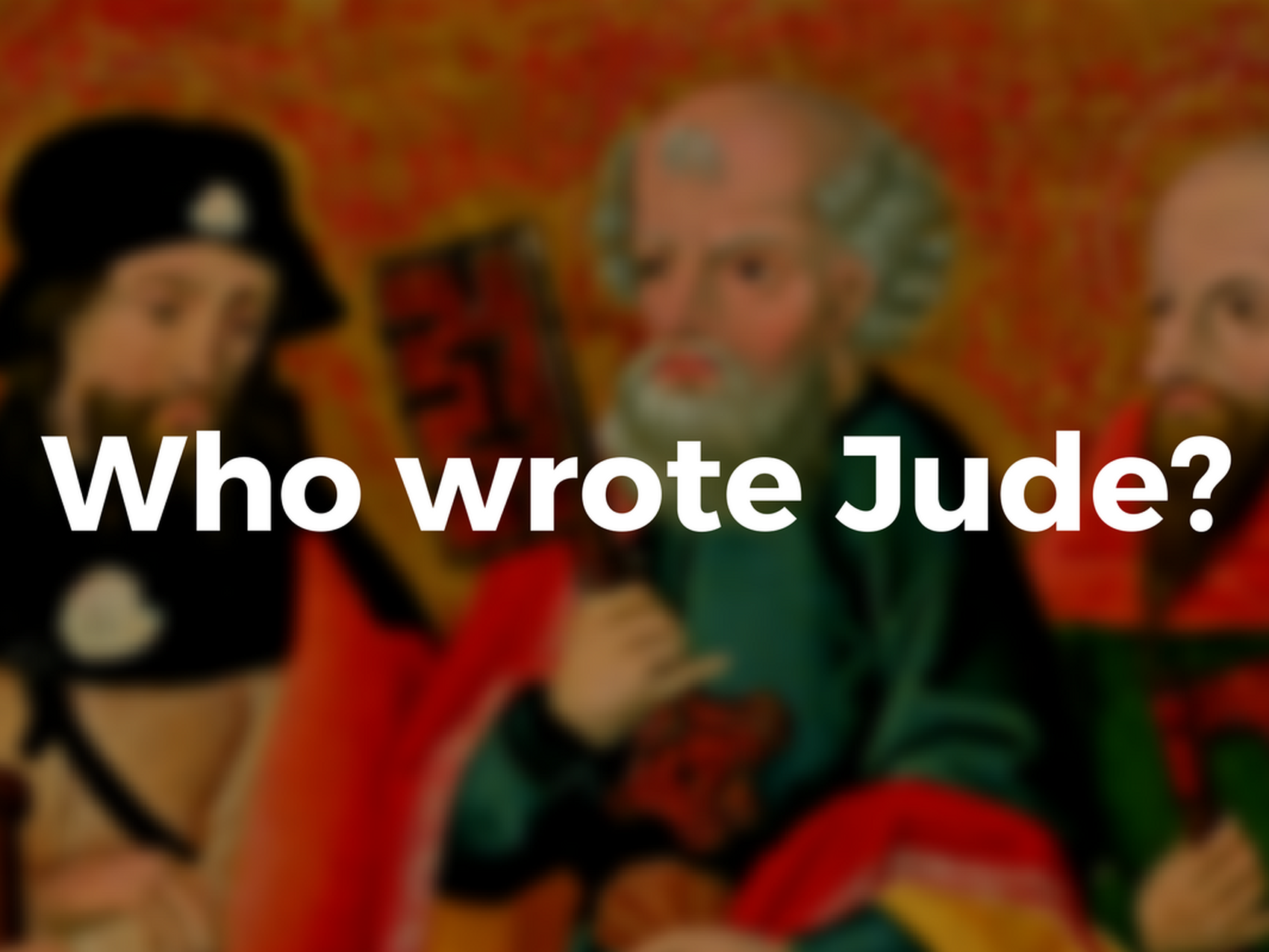 The book of Jude itself tells us that it was written by “Jude, slave of Jesus the Anointed One, and brother of James.”

There is a consensus that the “brother of James” identifies the author as the brother of that James who led the community of Jesus-followers in Jerusalem from at least 40 CE until his execution in 62 CE—in other words the same person who wrote the book of James.

That would make Jude the younger brother of Jesus. In lists of Jesus’ brothers James is always listed first and Jude is listed last (Matthew 13:55) or next to last (Mark 6:3).

But note that neither Jude nor James mentions a family relationship between them and Jesus.

The name itself is Judah in Hebrew or Aramaic—Jude or Judas is the Greek form—is unremarkable, especially for a Jewish family that claimed Bethlehem in Judah as its ancestral home.

Jude differentiates himself from other leaders in the Jesus movement of the same name—Judah son of James (Luke 6:16; Acts 1:13) and of course Judah son of Simon Iscariot (John 6:71).

He never claims to have been sent on a mission by Jesus—either before or after Jesus’ resurrection—and thus does not call himself an official delegate or apostle.

Why Jude called himself a slave

Jude calls himself a slave—but what does that mean?

A slave had no status in society. However, if you were a slave of someone important, then you share their status, even as their slave.

It’s worth mentioning that neither James nor Jude call themselves the “brother of the Lord,” the title others would give to them later. There is also no evidence that Jesus’ family made use of their relationship to Jesus.

Instead, by calling themselves slaves, they use a title of personal self-deprecation. Free people would have avoided this. But combining “slave” with “of Jesus the Anointed One” turns this title of self-deprecation into a title of authority—because they are sharing in Jesus authority.

In doing so, Jude makes it clear that he is not operating under the authority of the emperor or another high official—Roman or Jewish. He is serving an alternative kingdom.

This is the language of the first-century Jesus movement, for by the second century we find more exalted language used for the family of Jesus.

Did Jude really write the book of Jude?

But did this brother of Jesus named Jude actually write the letter?

Before we answer this question, we should examine the simplest approaches:

Given the lack of information about Jude, neither of these is a bad approach, but assuming that we do not choose simply to take the ascription to Jude at face value and want evidence that Jude is the one who wrote the letter, we have a much more difficult question.

In this video, Peter H. Davids discusses who wrote Jude: 0:00
By submitting your email address, you understand that you will receive email communications from HarperCollins Christian Publishing (501 Nelson Place, Nashville, TN 37214 USA) providing information about products and services of HCCP and its affiliates. You may unsubscribe from these email communications at any time. If you have any questions, please review our Privacy Policy or email us at yourprivacy@harpercollins.com.

Jesus was born in or before 4 BCE, the death of Herod the Great.

We do not know when his siblings (or cousins) were born, but if we allow that Mary (whichever Mary it may be) had a child approximately every two years (not unusual spacing for a woman who is breastfeeding each child for two or three years), that if the Mary was Mary of Cleopas she started childbearing about the same time as the Virgin Mary, and that mixed in among Jesus’ brothers were at least two sisters, Jude was probably born between 7 and 10 CE.

If there were more sisters or if the time between births was longer, Jude could have been born several years later.

If the 7 to 10 CE birth is accurate, then Jude, about whom there is no tradition of martyrdom, could have lived to 90 CE and still only have been eighty—old for those days, but not an unknown age.

This is not to say that Jude did live this long, but only that one could date the work in the 80s and still reasonably attribute it to Jude.

Any earlier date for the work would make the attribution to Jude that much easier.

Learn more about the book of Jude

When was Jude written?

We have few clues. There is no reference to any ruler, to any war, to any Jewish leader, to any Christian leader (except James, and in that case there is no information as to whether he is alive or deceased), to the temple, or to the temple’s having been destroyed.

But we can make informed guesses.

However, most references to “the faith” are found in later New Testament works, such as Acts 13:8 and 14:22, and Hebrews 4:14. It’s also found thirteen times in the Pastoral Letters.

Of course, the date of the Pastoral Letters is also debated, but at the earliest they are late in Paul’s life (i.e., the mid-60s CE). Given that Hebrews and Acts are probably from the 70s (or later), this linguistic evidence should make us guess at a later date for Jude, perhaps around the time of the Pastoral Letters, rather than an earlier one, although it does not make an early date impossible.

Second, there is also the evidence that those originally evangelizing the community being addressed are no longer present. This tells us that the community is old enough that the missionaries sent to evangelize them have said their farewells and left. This could have been their plan (“This community is mature enough; time to move on to a fresh area”) or as part of necessity (“We are getting out of town before they come for us”).

Third, the author has no problem citing Second Temple literature such as 1 Enoch and the Testament of Moses, which indicates he has not lost touch with the Jewish roots of the movement. That again would place him in the first century. This is consistent with the fact that he also does not seem to have a problem with those he opposes over Christology, which is assumed rather than discussed, nor does he discuss church structure. Both of these are more second-century concerns.

So we can root Jude relatively firmly in the second half of the first century, but there is nothing in this letter that would prevent us from dating it earlier or later within this period.

Was Jude capable of writing the letter?

The real issue with Jude, then, in terms of authorship, is not the date of Jude’s life or the self-designation of the author, but the style of the work.

Jesus is presented in our literature as the son of a Galilean peasant, a landless artisan. We would expect this family to speak Greek, not least because the major building project near Nazareth during the period in which Jesus was growing up was the Gentile town of Sepphoris/Zippori, where interaction with the foremen would have been in Greek. Furthermore, in Galilee in general the trade language was Greek.

Thus there is little question but that Jude and the rest of Jesus’ brothers could function in Greek.

In the case of Jude we are talking about a time period in which perhaps 10 or at most 20 percent of the population were educated, and even fewer were scribally literate.

Jude was a younger, perhaps the youngest son of a peasant family, so it is unlikely that he received any education other than a practical education.

Naturally, one cannot know for certain that Jude did not receive any education, but that is certainly what we would expect.

So we have the situation of a work that is full of wordplays, alliteration, and other skillful rhetorical devices, all in Greek and none of which would work in Hebrew or Aramaic, yet the book is attributed to a person whom we would not expect to be educated.

How could the man Jude write the Greek of Jude?

Did Jude have help writing the letter?

It’s possible that an amanuensis helped him. If that’s the case, then there’s an unknown ghostwriter at work. Perhaps this is the real literary author of the work, with Jude giving him a bit of basic direction. This depends on how much freedom the amanuensis had (which then depends on how well educated one thinks that Jude was).

This means we may be discussing a work whose essential author is unknown even if Jude were the author in a technical sense.

Yet, let us be clear, this whole discussion is based on probabilities: we know the author was skilled in Greek, and we know something about what level of education the average Galilean peasant would have.

We know how amanuenses were used.

We know nothing about Jude’s biography. Decent Greek education was available in Galilee, but we do not know whether Jude was the exceptional peasant who somehow gained access to it. Probabilities do not equal realities.

But is Jude pseudonymous?

Jude appears to speak to a specific situation, so it is hardly the work of someone wanting to influence the whole Jesus movement.

And while the person Jude may have been known within the Palestinian Jesus movement, he was certainly not known outside of the area. Even within that area there were bigger names, such as that of James.

If one wanted to have influence using a pseudonymous letter, why not use a name that carried real authority—James, perhaps, or Peter, or (in the right circles) Paul? Jude?

“Who’s he?” “He’s the brother of James.” “That’s nice; I will speak respectfully about him, but I’d rather hear from James.”

The improbability of the implied author is probably the strongest historical argument that this work actually has Jude son of Joseph (or Alphaeus) behind it. There seems to be no good reason for someone writing under a pseudonym to choose Jude, and there would be good reasons not to choose Jude, for the author of such a letter in any area where Jude was known as uneducated (assuming he was uneducated), and also good reasons for choosing a better known leader (even a deceased leader, such as James).

Learn more about the book of Jude

This post is adapted from material found in A Theology of Peter, James, and Jude, an online course taught by Peter H. Davids. Sign up for the course. 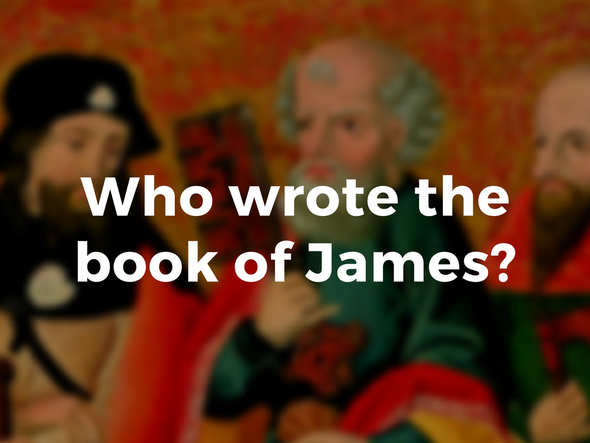 Who wrote the book of James? According to James 1:1, the letter is written by James himself. He was the son of Joseph, a construction worker who orig...
Your form could not be submitted. Please check errors and resubmit.