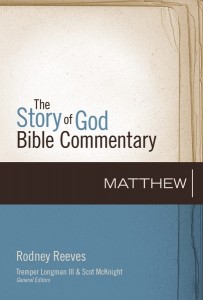 “Matthew’s version of our favorite holiday,” Rodney Reeves explains in his new Matthew commentary (SGBC series), “is hardly recognizable except for the star and the three wise men. Joseph nearly divorcing Mary, Herod’s diabolical ploy, the slaughter of the innocents, the flight to Egypt, waiting for a wicked king to die—none of these things make the cover of Christmas cards” (61).

Yet we need this story for the things Matthew wants to tell us about Immanuel's story.

In his commentary on Matthew 1:18–2:23, Reeves outlines several important insights into the passage. Below we’ve given you six surprising things you need to know about Matthew’s Christmas story this season.

The story of Jesus’s birth is more than a narrative of Israel’s covenant story coming true. It’s about two kingdoms colliding, two irrepressible forces clashing. The kingdom of heaven invading earth. The reign of God verses the rule of men. Herod against Joseph. (54)

Early in his analysis, Reeves highlights the fact that Herod is an Edomite, making him a descendant of Esau. And the fact Herod is confronted with the magi’s question “Where is the one who has been born king of the Jews?” establishing Matthew’s Gospel as a clash of kingdoms.

2) Israel Needed Someone to Save Them

A surprising part of the story comes when Joseph names his virgin-born son “Jesus” (Yahweh saves), signaling “that Israel needed someone to save them from their sins” (56).

This is remarkable because there was already a system in place “to take care of such matters.” Yet, “Israel needed a savior, the ‘anointed one’ to help God’s people get their house and his in order” (56).

“All of this,” Reeves explains, “would eventually happen according to Matthew’s version of the prophecies fulfilled in his Gospel story: the prophetic messenger, justice for the defenseless, the cleansing of the temple, the acceptable sacrifice—Jesus proves he is Immanuel” (56).

3) Joseph Appeared to Be a Lawbreaker

Matthew juxtaposes Joseph and Herod to serve his purpose of defining true righteousness. “Joseph was ‘truly faithful to the law,’ but he ends up disregarding the punishment required by the law for Mary’s circumstances” (56–57).

Jewish law gave Joseph an escape for her pregnancy: “Since betrothal was as binding as marriage, Joseph could have divorced Mary quietly by issuing a bill of divorce and sending her away from his house…” (57). Which he decided to do before the angel said otherwise.

So he “took her home as his wife” (Matt 1:24). “In so many respects, then, Joseph appeared to be a lawbreaker….But to those who knew the inside story, Joseph was a righteous man” (57).

4) Outsiders Blurred the Lines of Righteousness

The magi aren't merely an addition to Matthew's version, they're a significant one. Reeves argues these foreigners were the wrong guys for this story:

By all accounts these “wise guys” look like “fools.” Yet, “the magi did the right thing. They offered proper acts of obeisance to the king of the Jews—something Herod must have expected for himself” (58).

In another important difference between the Lukean and Matthean accounts, Joseph, Mary, and Jesus flee to Egypt:

The last turn of the wheel of Israel’s history…happened when Joseph took his family to Egypt to flee the wrath of the wicked king Herod. And, once again, as in the days of Moses the path of deliverance would take a circuitous route, this time from Judea to Egypt to Galilee. (60)

Reeves footnotes Davies and Allison here to explain: “We may say, then, that while Jesus culminates Israel’s history in chapter 1, in chapter 2 he repeats it” (60 [Matthew, 1:282]).

Upon their return the family lived in Galilee, fulfilling “what was said through the prophets, that [Jesus] would be called a Nazarene” (2:23). Reeves reveals a few insights:

He goes on to explain, “What was lost after king David—a divided kingdom—would be reunited in new life that springs from the holy stump…” (61)

“Despite the popularity of our sanitized version of Luke's account, I’m drawn to Matthew’s story—all of it” (63). Grab Revees’s Matthew commentary to gain more insight into Matthew’s version of the Christmas story and his Gospel.