[Common Places] New Voices for Theology: Jonathan Linebaugh’s God, Grace, and Righteousness in Wisdom of Solomon and Paul’s Letter to the Romans Good theology has a shape, a structure: a way of connecting its various themes and motifs via one or more anchor points that fix the framework of the whole.  Hence the most profound attempts at theological comparison dig deeper than the similarity or difference between theologians on this or that motif, and attempt to unearth their respective foundational structures (or discursive grammars).  And sometimes, by digging this deep, the best and most illuminating conclusion is that two different theological structures are simply incommensurable, even if they share on the surface a number of points in common.

Jonathan Linebaugh’s God, Grace, and Righteousness in Wisdom of Solomon and Paul’s Letter to the Romans is a book that with rare acumen digs this deep.  Paul’s theology has often, and with good reason, been brought into comparison with the theologies of Jewish authors of his time, but all too often such comparisons have been overloaded with ideological baggage—in attempts to prove either that Paul is diametrically opposite to his fellow Jews or that there was really nothing substantial in their apparent disagreements.  Linebaugh enters these fraught debates that have intensified in the wake of the “new perspective” but does not accept the terms or the frame of the current discussion.  Here he wisely confines himself to just one text that stands at many points in very close proximity to Paul and springs from the contemporary Jewish community in Alexandria: Wisdom of Solomon.  His tactic is to generate a conversation between Wisdom and Romans such that he can illuminate not only how they agree or disagree, but more fundamentally why.  His unusually deep soundings into this why, and the theological sophistication with which he discusses it, renders this work one of the very best books on “Paul and Judaism” for many a year.

Linebaugh is determined to let each text speak for itself—not only on the grounds of “fair play” (too often scholars are tempted to raid texts for statements extracted from their context) but also because of his proper intuition that even the same terms (in particular here, righteousness [dikaiosune] and grace [charis]) derive their meaning from their textual and conceptual contexts, not from some external point of definition.  Thus he devotes three sizeable chapters to a careful reading of Wisdom—a text rarely given this depth of exegetical and theological analysis—before embarking on Romans and establishing a fascinating conversation between the two.

The method is exemplary (lots of PhDs now follow in its wake) and the conclusions are highly revealing.  The theology of Wisdom is held together by a firm conviction of the symmetry of the cosmos, a just equilibrium that includes space for mercy but ever seeks the congruence between divine grace and the “fit” or “worth” of its recipients: thus the righteous and non-idolatrous (Israel) are saved in the Exodus, while their opposites (Egyptians) get the judgement they deserve—and that as a historical exemplar of the just cosmic order established by Wisdom.  By comparison, even at the points where his concerns most clearly overlap, Paul parades a disruptive incongruity in the grace and even (in fact, especially) in the righteousness of God, and that because his anchor point is not the cosmic order but the unconditioned gift of God in Jesus Christ.

To cite Linebaugh: “Wisdom rereads and rewrites pentateuchal history according to the formal criterion of correspondence because canonical history is necessarily the paradigmatic exemplification of the pre-creational order; Paul rereads and re-imagines Israel’s history according to the formal criterion of contradiction (e contrario) because he hears Israel’s past as a typological testimony to and Israel’s prophetic tradition as a preannouncement of the unconditioned and incongruous event and impact that is God’s act in Jesus” (p. 231).

This reading is not only uncommonly perceptive.  It insists, against a confused and confusing consensus, that the key word grace is not univocal: it can mean different things to different authors (ancient and modern).  As Linebaugh insists, the differences here are not a matter of degree (one author stressing grace more than another), but rather in definition: the same term means different things in different conceptual contexts.  Using the normal language of charis and associated words for divine benevolence, Wisdom stresses divine goodness and gift as lavishly but discriminately given to the fitting: how else could God’s gifts be good in a justly ordered world?  Using the very same language, but in a Christologically determined context, Paul describes the gift of Christ as given without regard to worth—resulting in the justification of the ungodly, and the raising of the dead.  This sheds a flood of light on the larger question concerning Paul’s relationship to Judaism.  In fact, it resets the terms of the debate that has raged since Ed Sanders’ Paul and Palestinian Judaism (1977), since the latter worked on the assumption that grace was not only everywhere in Paul and Second Temple Judaism, but everywhere the same.  Not so, shows Linebaugh; and with that the debate takes on a very different hue.

The results are fascinating for Christian theology.  For those in the Catholic tradition, for whom Wisdom of Solomon forms part of the canon, this book raises important questions about that canon and its theological shape.  For Protestant theologians, for whom the Paul side of Linebaugh’s comparison holds greater authority, what emerges here is a stimulus to deep reflection on the relationship between a theology based on the Christ-event, in all its shocking “foolishness,” and a theology searching for the seeds of wisdom in the construction of the world.  Linebaugh brilliantly restores to Paul his radical and subversive edge, which has been much blunted in recent decades.  By insisting that the Christ-gift was the generative basis for Paul’s rethinking of Scripture, history, and truth, he offers a reading that should attract and stimulate theology in regions far beyond the field of biblical studies.

John M. G. Barclay is Lightfoot Professor of Divinity at Durham University. His research has focused on the social history of early Christianity (especially in Pauline churches), Judaism in the Roman world (especially Josephus), and Pauline theology. He is author of several books, including Pauline Churches and Diaspora Jews and Obeying the Truth: Paul’s Ethics in Galatians.

John M. G. Barclay
John M. G. Barclay (PhD, Cambridge) is Lightfoot Professor of Divinity at Durham University. His research has focused on the social history of early Christianity (especially in Pauline churches), Judaism in the Roman world (especially Josephus), and Pauline theology. He is author of several books, including Pauline Churches and Diaspora Jews and Obeying the Truth: Paul’s Ethics in Galatians.
Next Post
Hebrew and You with Lee M. Fields — No “Yes,” But Two Nos: Zechariah 1:4 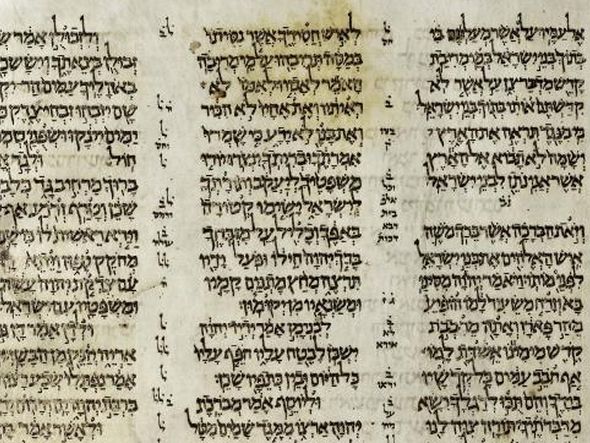 Hebrew and You with Lee M. Fields — No “Yes,” But Two Nos: Zechariah 1:4 The last few posts have been a little heavy. In this post, I would like to focus on a lighter matter, which I hope you f...
Your form could not be submitted. Please check errors and resubmit.