Taking the long view of things, the Christian doctrine of God has had a strange career.

It took its classic, trinitarian form as the early church’s interpretation of Scripture, with theologians intentionally developing hermeneutical constructions and elaborating reading strategies that would do justice to the things they read in the apostolic texts. It was a Bible doctrine. Sure, it was sharpened against the whetstone of heresy, and partly paraphrased into an eclectic philosophical vocabulary, but fundamentally it was an effort to say what was known about God from Scripture.

But over the past few centuries the field of biblical studies has won independence from other theological disciplines, and along the way it has carefully developed its own methods and techniques for construing the teaching contained in the Bible. There are many happy results, and much has been gained. But one of the unhappy byproducts is the distance that now stands between the arguments and vocabulary of doctrinal theology on the one hand and New Testament studies on the other.

The Trinity and New Testament Scholarship: A Journey Too Far?

The doctrine of the Trinity, with all its conceptual distinctions and terminological apparatus, stands so obviously on the doctrinal-theological side of the divide that New Testament scholars, operating in their professional capacity, have almost nothing to do with it. As believers, they may salute the Trinity from a distance, acknowledging that it arises from the church’s faith as a synthetic judgment via certain more or less legitimate systematic-theological maneuvers. But the trinitarian conceptuality couldn’t possibly have a place in exegesis of any wissenschaftlich rigor. As one scholar has recently warned, “the road from Pauline theology/christology to trinitarian doctrine is, for many, either non-existent or else strewn with journey-disrupting rubble.”

That scholar is Wesley Hill, and the observation is from his 2012 dissertation at Durham, soon to be published as Paul and the Trinity: Persons, Relations, and the Pauline Letters (Eerdmans, 2015). Hill thinks there is in fact a road from Paul to the Trinity, and in this book he points it out.

What Hill does in this groundbreaking study is pick up one particular element of traditional trinitarian theology from the early church, and take seriously the notion that it might be useful as an exegetical tool.

Let me confess, speaking as a systematic theologian with a bias in favor of the great tradition, that it’s not hard to assert that the church fathers were way ahead of modern exegetes, and to do so with whatever amount of bluster you think your audience will let you get away with. There are plenty of books and essays claiming that _________ had it right long ago (fill in the blank with Augustine, Aquinas, John Owen, etc.) and isn’t it nice that the poor, benighted biblical studies folks are finally catching up. But it’s quite another thing for a New Testament scholar to carry out a focused project of investigation to test the hypothesis that a particular aspect of the trinitarian framework may be exegetically useful.

It’s the category of relation, and the framework of persons in relation, that Hill recommends as a tool appropriate to understanding Paul. He cites Nils Dahl’s observation that “according to the New Testament, God the Father, Jesus Christ, and (less clearly) the Holy Spirit each have a discrete identity, and yet none of the three can be described adequately unless the interrelationship among them is taken into account.” One of the things most obviously being negotiated in classic pro-Nicene trinitarian theology was just this: that we know the persons of the Trinity in their relations to each other, that the relations are equiprimordial and constitutive, that the relations among these three are a basic datum of revelation because they are the basic reality of God’s being.

Hill keeps a respectful distance from the high end of those claims, precisely because he is determined to make the point about Paul’s own usage: “Paul’s speech about God, Jesus Christ, and the Spirit is intricately intertwined so that talk about any one of the three (God, Jesus, or the Spirit) implies reference to all of them together (God, Jesus, and the Spirit).” That is an observation about the Pauline corpus.  In fact, it is probably the kind of observation that led the church fathers to say the things they said, in a very different conceptual idiom.

Paul and the Trinity settles into its primary mode of close, detailed exegesis when Hill begins tracing the way that God, Christ, and the Spirit are always mutually involved in Paul’s theology; in the way we never get one without the other. It’s not just that Paul goes out of his way to mention two or three of the persons in close proximity; Hill’s point is the deeper one that “each person is only identifiable by means of reference to the others.”

With regard to Christ, this means that “the question of whether Jesus/‘the Son’ occupies a ‘high’ or ‘low’ position relative to ‘God’ is not likely to appear as an urgent one, since ‘God’ is never construed as identifiable apart from ‘the Son’, and vice versa, ‘the Son’ is never taken to denote an identity explicable apart from his relation to God.” We can’t ask how close Jesus is to God without first specifying the identity of this God, but Paul won’t let us specify that God without reference to Christ and the Spirit. Using this trinitarian framework, which he freely admits is borrowed from fourth-century theologians, Hill is able to get a stronger grip on Paul’s own arguments, and also to integrate recent insights into Paul’s monotheism and Christology.

“Exegesis of Paul,” notes Hill, “does not reach its full potential without trinitarian theology, and, likewise, trinitarian theology is impoverished if it neglects biblical exegesis in general and exegesis of Paul in particular.”  He goes on to say that “such a symbiosis should come as no surprise,” and yet his argument in this book, and the conclusions that should be drawn from it, will be surprising to those who read it well. I expect it will turn a few heads in the biblical studies guild because it so obviously offers a new way forward. But it should also shake up a few settled conventions in contemporary constructive trinitarian theology, delivering some new tools that systematic theologians would be foolish to ignore.

Fred Sanders (PhD, Graduate Theological Union) is professor of theology in the Torrey Honors Institute at Biola University in La Mirada, California. He is author of several books including The Deep Things of God: How the Trinity Changes Everything, Dr. Doctrines’ Christian Comix, and The Triune God in Zondervan Academic’s New Studies in Dogmatics (forthcoming). Fred is a core participant in the Theological Engagement with California’s Culture Project and a popular blogger at Scriptorium Daily.

Fred Sanders
Fred Sanders is Professor of Theology at Biola University's Torrey Honors Institute. He has an MDiv from Asbury Theological Seminary and PhD from Graduate Theological Union. He is the co-editor of Christology, Ancient and Modern and Advancing Trinitarian Theology, and author of The Triune God. His new online course on the doctrine of the Trinity is also now available.
Next Post
The Land of Israel [Infographic] - The Most Significant People, Places, and Events in the Bible 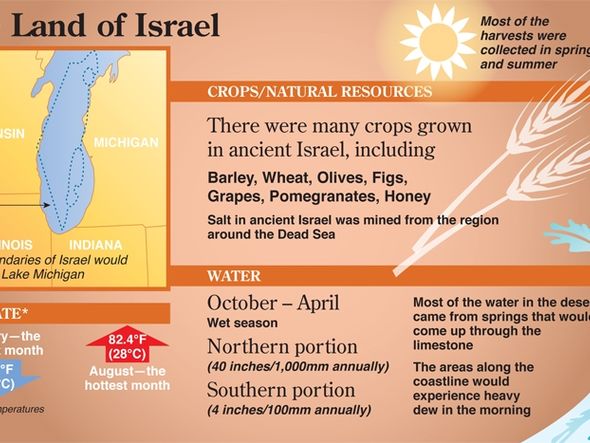 The Land of Israel [Infographic] - The Most Significant People, Places, and Events in the Bible If you've been a teacher or pastor for long, you know that when it comes to quickly grasping and retaining information, ...
Your form could not be submitted. Please check errors and resubmit.