Canon and Biblical Interpretation is a masterful examination of the canonical approach to interpreting Scripture, and the various criticisms that have been leveled against it.

Our excerpt today introduces the scope, premise, and unique positioning of the book in addressing the apparently controversial subject matter of interpreting Scripture canonically. As the opening pages explain, “Suspicions concerning the validity of a ‘canonical’ approach to the biblical writings have been expressed on both phenomenological and theological (or anti-theological) grounds.”

Read the excerpt and explore the book yourself to understand the current state of canonical interpretation and the starting point for interpreting the Bible today. Also, check out the Scripture & Hermeneutics Pack (Just $150 | Retail Value $300).

Arguably the disintegration of an emphasis upon the unity of the biblical writings, initially witnessed by widespread disenchantment with the so-called biblical theology movement, gathered momentum first by the concurrent rise of redaction criticism and then more recently from the impact of a postmodern cast of mind and an emphasis upon diversity among communities of faith and within academia. Fragmentation and suspicion of ‘grand narrative’ are hallmarks of postmodern thought.

At one level theological interpretation and theological construction become impossible without some notion of biblical canon as serving ‘to mark out the circumference of acceptable diversity’. In the early centuries of the Christian church Irenaeus argued that if the church were to accept Marcion’s expulsion of the Old Testament from the Christian Scriptures, the church would lose the frame of reference within which the New Testament was to be interpreted, and the coherence of the biblical witness to Christ would be disrupted.

All the same, those who bring to the issue more pluralist, phenomenological, or postmodernist perspectives, as well as some more traditional biblical specialists may well respond to our quotation above from James Dunn with the question: to whom is the boundary of diversity that marked out the canon ‘acceptable’? Is not this supposed boundary an artificial construct imposed by the Christian church (or its dominant theologians) of the third or fourth century? Does not the insistence of Irenaeus, for example, on working with the four Gospels as a canonical unity reduce and flatten down the distinctive witness and tradition of each evangelist as representative of a particular tradition into a monochrome ‘harmony’ of the Gospels?

Suspicions concerning the validity of a ‘canonical’ approach to the biblical writings have been expressed on both phenomenological and theological (or anti-theological) grounds. Thus, in terms of the first point, James Barr declares, ‘In biblical times the books [of the Bible] were separate individual scrolls. A ‘Bible’ was not a volume one could hold in the hand, but a cupboard…with a lot of individual scrolls. The boundary [of ]…what was Scripture…was thus more difficult to indicate.’

In relation to the second area of contention, some will remain unmoved by the implicit arguments of Irenaeus and Tertullian that theological construction necessitates reference to the whole potential ‘canon’ of Scripture rather than only to selected biblical texts. Robert Gundry’s essay of 2005 is among the most recent to argue that theological construction does necessitate recourse to the variety and diversity of the canon. He argues, for example, that a Christology based on Mark alone would be of a different shape from one based only on the Fourth Gospel or only on Paul. By contrast Heikki Räisänen insists that ‘recognition by biblical scholarship of the wide diversity of beliefs within the New Testament itself ’ renders ways of using the Bible for theological construction or synthesis ‘unviable’. ‘The New Testament has turned out to be filled with theological contradictions.’  Räisänen goes further and writes in a dismissive tone: ‘Conservative theologians have stressed the alleged theological unity of the two Testaments and striven towards a canonical, pan-biblical, theology (Childs 1992: Stuhlmacher 1992).’ Pressing professional courtesy to the limits he states that this ‘runs counter to the rules of sound scholarship’.

This amounts to a declaration of war upon the canonical approach, and invites critical scrutiny of this allusion to ‘rules’ of sound scholarship. In the history of modern discussions of canon, Brevard Childs notes in his chapter below that in his essay of 1950 to the World Council of Churches Ernst Käsemann asserted that the canon served not as a source of unity, but as a source of disunity. Childs also alludes to an increasing tendency to follow Harnack, Sundberg, and Gamble on seeing the formation of the New Testament canon as the product of contingent historical factors deriving from outside the church in the second and third centuries, as against the view of Westcott, Metzger, and others that the canon constituted a recognition of the impact and nature of Scripture through internal processes and judgements within the Christian church.

While most biblical and hermeneutical specialists will endorse the importance of the subject-areas of the first six volumes of this Scripture and Hermeneutics series, this seventh volume carries a title that provokes controversy, even hostility, in some circles.

Jeremy Bouma
Jeremy Bouma (Th.M.) has pastored on Capitol Hill and with the Evangelical Covenant Church in Michigan. He founded THEOKLESIA, which connects the 21st century Church to the vintage Christian faith; holds a Master of Theology in historical theology; and makes the vintage faith relevant at jeremybouma.com.
Next Post
God's Promise Fulfilled in Jesus [Infographic] – The Most Significant People, Places, and Events in the Bible 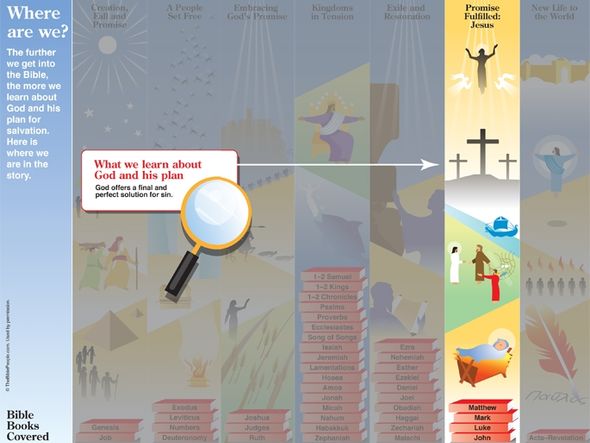 God's Promise Fulfilled in Jesus [Infographic] – The Most Significant People, Places, and Events in the Bible When it comes to quickly grasping and retaining information, the human brain functions best with a combination of both w...
Your form could not be submitted. Please check errors and resubmit.