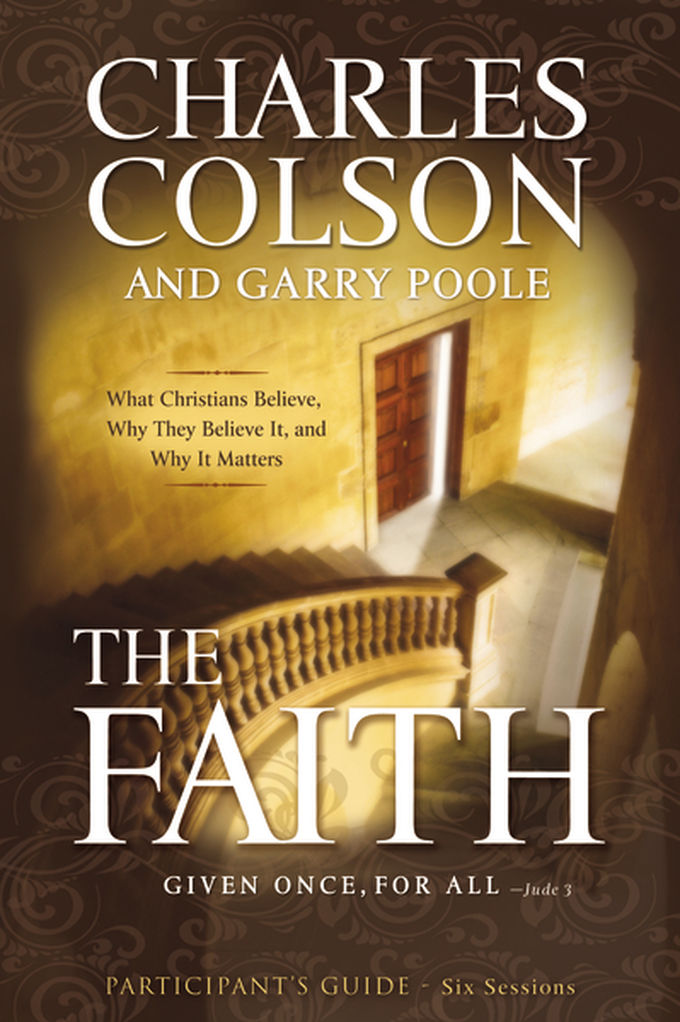 Through this six-session small group study, The Faith, Charles Colson articulates the foundational truths of Christianity and how they compare to other belief systems.

The Faith small group study will serve Christians – and non-Christians – for decades to come. Chuck Colson and Gabe Lyons lead you through six thought-provoking, soul-searching, and powerful sessions on the great, historical central truths of Christianity that have sustained believers through the centuries. Brought to immediacy with vivid, true stories, the truth of what Christianity is about and why it is a religion of hope, redemption, and beauty.

This Participant Guide is designed for use with the companion DVD (sold separately). When used together they are a powerful catalyst for spiritual transformation.

Sessions include:
1. The Faith – Given Once and for All
2. What Went Right, What Went Wrong
3. The Free Gift – Costly Grace
4. The Trinity – God Above, God Beside, God Within
5. Be Holy – Transform the World
6. The Great Proposal

Chuck Colson was a popular and widely known author, speaker, and radio commentator. A former presidential aide to Richard Nixon and founder of the international ministry Prison Fellowship, he wrote several books that have shaped Christian thinking on a variety of subjects, including Born Again, Loving God, How Now Shall We Live?, The Good Life, and The Faith. His radio broadcast, BreakPoint, at one point aired to two million listeners. Chuck Colson donated all of his royalties, awards, and speaking fees to Prison Fellowship Ministries.

As Willow Creek Community Church's key evangelism leader for over sixteen years, Garry Poole is the innovator of seeker small groups and a strategist of creative outreach initiatives. Passionate about reaching people for Christ, Garry and his team have trained thousands of leaders to launch seeker small groups in their own settings. His award-winning book, Seeker Small Groups, provides a detailed blueprint for facilitating small group discussions that assist spiritual seekers with investigating Christianity. He also wrote The Complete Book of Questions, a collection of 1001 conversation starters and numerous group study guides including The Three Habits of Highly Contagious Christians; The Tough Questions Series, and Experiencing the Passion of Jesus (with Lee Strobel) to accompany Mel Gibson’s film, The Passion of the Christ. In 2005, it became the first discussion guide ever to receive the prestigious Charles “Kip” Jordon Christian Book of the Year award. Garry lives in suburban Chicago.